Dedicated to Skepticism, Inspired by Curiosity 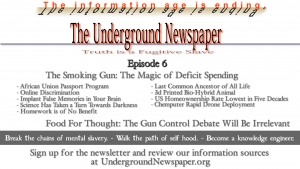 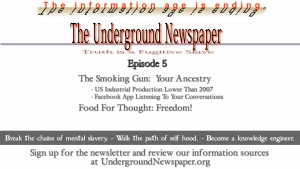 Underground Newspaper: Episode 4 - Inflation vs GDP / What is a Home Worth? 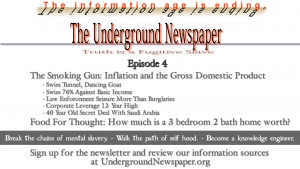 Underground Newspaper: Episode 3 - History is Boring / You Are Not A Single Pixel 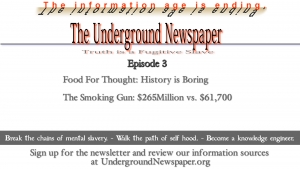 Underground Newspaper: Episode 2 - The BLS is Full of Crap / Population is Decreasing 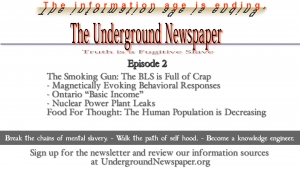 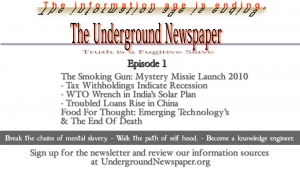 The Information Age is Ending.

The way we interpret information is more relevant than access to information.

Truth is a Fugitive Slave.

We are the Engineers of the Underground Newspaper who rescue Truth from the propagandists, nurture it and set it free.

We are gathering together a small but critical mass to liberate a new approach news media.

Join Us! - Read the contents of this page. Sign up for the newsletter.

To Inspire people to empower themselves by becoming Knowledge Engineers and give them the tools to do so.

To Create the opportunity for grass roots media empowerment.

Waking Up Is Only The First Step

The Truth Is Hiding Behind Big Lies

The reality which exists independent of opinion.
The state of the universe.

Behavior based on assumptions.
Accepting a theory as a Truth.

The medium of communication.
The public expression of information.

Having a meaningful relationship with the Truth.
Without Truth, we are not conscious.
When we know more truth, we are more conscious.

The science and art of manipulating belief to limit consciousness in order to increase control.

Politicians, Religions, Governments, Businesses, and Individuals all want to control what we Believe.

The Manipulation of Belief is the Source of Power.

What you believe does not make you who you are.

Pursue the truth. Don’t use it to define yourself.

Learn the Logical Fallacies, Look for them in Media.

Are the conclusions actually being proven by the evidence?

Have you formed an opinion, or was one formed for you?

Learn to distinguish the presentation from the facts.

Are your emotions or subconscious being manipulated?

Are things happening too fast for you to recognize, consider or reflect?

Are you being told to believe things that don’t make sense?

Are you expected to come to an obvious conclusion? If so, who benefits?

Give Theories A Truth Value

If there is a preponderance of evidence supporting a theory, it is more likely to be true.

It there is little evidence supporting a theory, it is less likely to be true.

Does the theory conflict with or contradict other theories?

Does the theory explain other mysteries?

Is the evidence rational and objective?

When you control your mind, you can change your mind.

If you don’t have enough knowledge to form a conscious belief, don’t. Consider multiple possible truths.

Limit your conclusions to what has both a preponderance of evidence and the ability to explain.

If a puzzle piece does not fit, keep it in your hand, don’t force it into place.

Are you being pressured to choose one or more opposing view points?

Seek both what supports your beliefs and what refutes them.

Do your beliefs stand up to criticism?

Wise is the Story

You won’t ever have all the facts, but you may have the most true fiction.

You are not required to know everything in order to know truth. Be your own expert and quote yourself often. Your mind is the most objective source of information you have.

Tell yourself a story.

How does different information fit or not fit the plot?

Assertions that are loud or impressive often have little truth.

If you want to prove a theory, try to disprove it.

Truth rarely comes from a single observer. Be wary of information that can not be corroborated. Be even more wary when many news organizations parrot the same information from the same source.

A theory is more true when it can be independently verified.

If a news organization has a stake in influencing what you believe, they won't be objective.

Consider the business model which generates the media you consume.

Is it selling advertising? Who is paying for the ads?

Are there financial or other contributions from Corporations, NGO's or PR firms?

Media which acts on your primal instincts is usually manipulative. If nothing more, it is a waste of time.

Are you being influenced to fear other people?

Are you being influenced to be dissatisfied with your self?

Are you being encouraged to feel helpless?

Often main stream media will divert your attention away from the obvious question(s).

Step away from the stream of distraction and consider what questions you need answered.

Realizing you are a slave, does not set you free.

The ability to cut through propaganda, to name the perpetrators and their intentions, then turn their omissions into insight, is a skill that grows to fruition with practice. Learn to process news into relevant and irrelevant information. Learn to break information apart and reconstruct it. Information is a bunch of musical notes. Knowledge is a symphony.

The Piece That Does Not Fit

Great insight can be gained from the piece that does not fit neatly into the storyline. While the most important discovery is the information that can not be explained at all. You can't ignore the smoking gun. If the information is veracious, to retain your intellectual integrity, your world view must adapt to accept it.

The foundation of consumer culture is identity. To be who you are, requires that you consume clothes, music, cars, movies, Political Party's, sports teams, etc. that define you. The extent to which you are successful is the extent to which you have been able to construct around you the most socially appealing facade based on some collection of beliefs, tastes and fetishes which we are encouraged to presume are divinely inspired and infallible.

You are taught to believe that your choice of political party is a part of who you are not how you think. Because you consider yourself a "Democrat" or a "Republican", rather than exploring the differences in policy, we seek confirmation of our pre-existing bias.

Rather than helping to define your political party, your political party defines you. The result is balkanization into opposing ideologies, which build their logic on facts carefully selected to support forgone conclusions and only engage with straw man versions of opposing views.

Intentionally divisive topics like racism, abortion, immigration or gun control are paraded in front of a body politic composed of increasingly entrenched idealogues. While both parties increasingly share policies of militarism, elitism, centralized banking, corporate welfare, social welfare and other forms of paternalism.

Do you have the courage to tear down the facade your culture has demanded you build and walk the path of Selfhood?

Do you have objectivity?

Do you have sound logic?

Do you have integrity?

Do you have the courage to admit when you are wrong?

Is the foundation of your process love?

Answering those questions makes you who you are. That is the Process of Selfhood.

Becoming conscious of certain knowledge will radically change your world view. There are rabbit hole moments which we have been taught to fear. The Knowledge Engineer seeks them out.

All Aboard the Freedom Train!

If you are ready to nurture the seed of selfhood into a towering redwood tree of knowledge, then apply your process to the knowledge which challenges you most.

Join Us as we gather truth seekers of all stripes to ferment a mental slave rebellion in how we address the news media.

Why the interest in the Ziggurat or Ur? 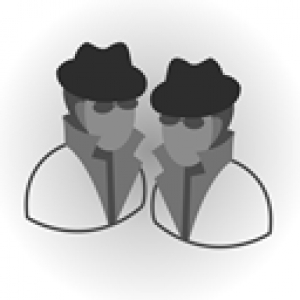 Saddam stationed troops there and built an airbase near by?

The US and UK are now in the process of continuing "excavations".  To what end?

Global Unrest On The Rise? 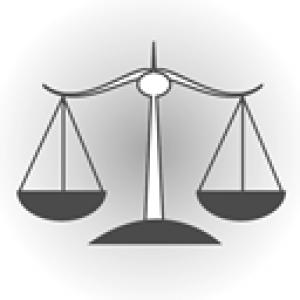 Take a look at the article in the link below to find out what the Big Bank perspective is on civil unrest, uncertainty and the bottom line. 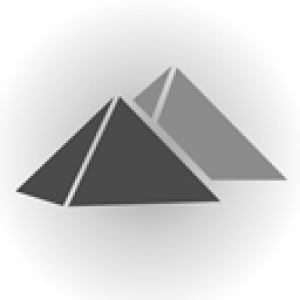 Was an advanced ancient civilization swallowed by the sea?

Evidence exists to suggest so. Read more in the link below.

Published in Alternate Histories
Tagged under
Be the first to comment!
Read more...
Page 1 of 2

Please check your email and confirm the newsletter subscription.